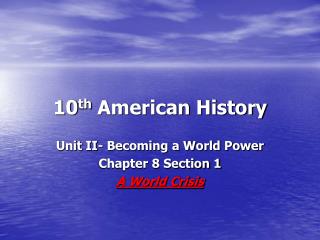 10 th American History. Unit II- Becoming a World Power Chapter 8 Section 1 A World Crisis. A World Crisis. The Main Idea Rivalries among European nations led to the outbreak of war in 1914. Reading Focus What were the causes of World War I? How did the war break out?

American History Chapter 1 The World Before 1600 - . people arrived on the american continents thousands of years ago and

US History: The American Revolution - . objectives. understand and explain the political, social, economic, and cultural

AMERICAN HISTORY - . a new nation review!. “ i won because i learned!”. here is some extra fun for when you finish!