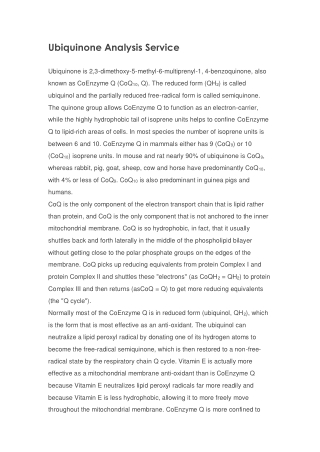 Ubiquinone is 2,3-dimethoxy-5-methyl-6-multiprenyl-1, 4-benzoquinone, also known as CoEnzyme Q (CoQ10, Q). The reduced form (QH2) is called ubiquinol and the partially reduced free-radical form is called semiquinone. The quinone group allows CoEnzyme Q to function as an electron-carrier, while the highly hydrophobic tail of isoprene units helps to confine CoEnzyme Q to lipid-rich areas of cells. In most species the number of isoprene units is between 6 and 10. CoEnzyme Q in mammals either has 9 (CoQ9) or 10 (CoQ10) isoprene units. In mouse and rat nearly 90% of ubiquinone is CoQ9, whereas rabbit, pig, goat, sheep, cow and horse have predominantly CoQ10, with 4% or less of CoQ9. CoQ10 is also predominant in guinea pigs and humans. Selling Your Comprehensive Operational Analysis How RTD established a partnership with the City of Stockton - Summary.

Systems Analysis and Design 8 th Edition - . chapter 7 development strategies. the impact of the internet. software as a

How Walkable and B ike-able Is UCLA ? Multi-Modal Level Of Service Analysis in the UCLA Campus - . hyeran lee class of