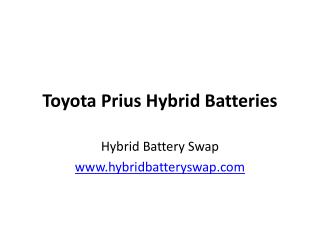 The Toyota Prius is The car that started the whole hybrid vehicle revolution. Toyota introduced this very first mass produced hybrid vehicle to consumers in 1997, and now it is being sold in almost 80 countries! Global cumulative Prius sales passed the $3 million mark in June, 2013 and sales are continuing to grow. Toyota group in China - Toyota has taken more unconventional tactics for moving into china than ever ... attended and

A Picture Diagram of a Torch - . british standard circuit symbols. battery. switch. bulb. a circuit diagram of a torch.

CHAPTER 18 Battery Testing and Service - . objectives. after studying chapter 18, the reader will be able to: prepare for

John Shook the First TWI Summit Orlando Florida June 6, 2007 - Training within industry and toyota a look at the role of