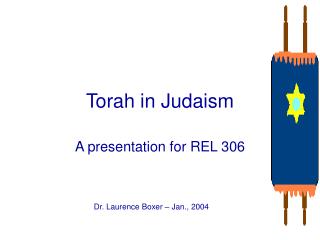 Today’s Aim: How did the writings in the Torah shape Judaism? - . the hebrew bible is the jewish people’s record of

What does the Torah refer to? With whom does Judaism begin? - Bell ringer, 8-20. please copy down the following questions

Checksum in the Torah - . title page. the information in this presentation from slide 1 thru 11 was originally published

The Torah - . what is it? why is it so important to the jewish people?. introduction. the torah is the sacred text of the

The ToraH - “in matters concerning truth and justice there can be no distinction between big problems and small; for