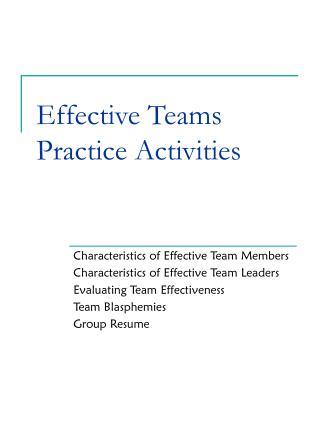 Effective Teams - . working together. what is a team?. a group of people with a full set of complementary skills required

Building Effective Teams - . marc belaiche , ca president torontojobs.ca. agenda. what is a team? why have teams? how to

Practice Activities - . controlled practice activities. the activities the teacher uses to give the students first

Effective Groups and Teams - . chapter nine. after reading the material in this chapter, you should be able to:.

Building Effective Leadership Teams - . how can independent schools move from siloed leadership to an effective model of