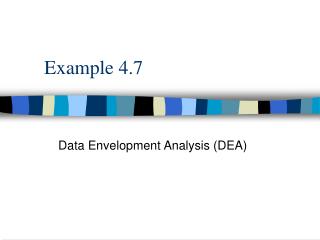 Example 4.7 Data Envelopment Analysis (DEA) Background Information Consider a group of three hospitals. To simplify matters, we assume that each hospital “converts” two inputs into three different outputs. (in a real DEA, there might be many more inputs and outputs.)

Section 4.7 - . slope-intercept form. coordinated plane. graphing lines. a line is the graph of a linear equation

Section 4.7 - . optimization problems. example 8. a rectangular package to be sent by a postal service can have a maximum