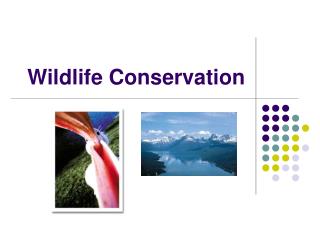 Conservation of Natural Resources: Soil, Wildlife and Energy - . what is conservation?. protecting the land and resources

Bio 317: Conservation of Wildlife Resources - . reading assignment – chapter 1 and 2 why this course is important to

Development of a computer information system for wildlife conservation in Louisiana, with a prototype system for fishes

Wildlife Management - . practices and techniques. what is wildlife management. it is an important part of wildlife

Wildlife Without Borders: Conserving the Sahelo-Saharan Antelopes of North Africa