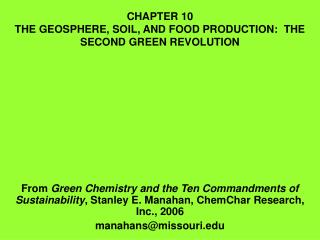 Green Tea – A Cup of Green Tea A Day Keeps All Your Diseases Away! - As we enter, in to today’s health conscious

Think Green With Green Art - . reduce: how many materials do we really need to make artwork?. robert smithson spiral

The Geosphere - . what is the geosphere?. all solid parts of earth rocks, soils, minerals, sediments, magma. the grand

The Geosphere - . the earth as a system. the earth is a system of 4 interacting components. consists of: - geosphere -

The Geosphere - . honors biology chapter 3. definition. the solid part of the earth, including all rock, soil, and

Chapter 1: Earth as a Planet - . what is geology?. geology scientific study of earth physical geology understand

Environment - . everything living and nonliving. humans are part of the environment…we are not separate from nature. .

CHAPTER 11 TOWARD A GREENER ANTHROSPHERE THROUGH INDUSTRIAL ECOLOGY - . from green chemistry and the ten commandments of

CHAPTER 1 CHEMISTRY, GREEN CHEMISTRY, AND ENVIRONMENTAL CHEMISTRY - . from green chemistry and the ten commandments of

Analyzing Transactions - 0. 2. analyzing transactions. 0. 2-1. accounting systems are designed to show the increases and