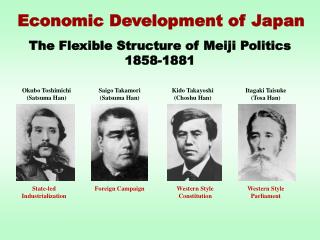 Challenges in Economic Statistics -- How they evolved in Japan -- - . shigeru kawasaki statistical research and training

Japan: A Strategy for Economic Growth - . manec 358. context japan, 1945. dependence on us for trade defense umbrella

METI (Ministry of Economy, Trade and Industry) JAPAN - . for further development in the computer related services (for

RUSSIA AND JAPAN: INDUSTRIALIZATION OUTSIDE OF THE WEST - . 1850 – 1914 . overview. russia and japan managed to avoid

Economic Development of Japan - . no.3 meiji 1. pp.40-42. second arrival of the west and end of edo. us commodore perry