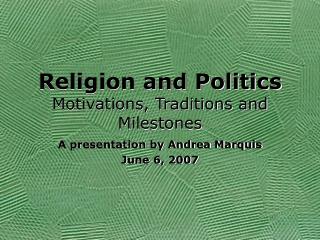 Religion and Politics Motivations, Traditions and Milestones. A presentation by Andrea Marquis June 6, 2007. Questions We’ll Answer. How does religion effect motivation to participate in politics? How does this vary by religion? By era in time?

Unit 2: Early Modern Times - . during this unit, you will:. know the major developments that led to the emergence of