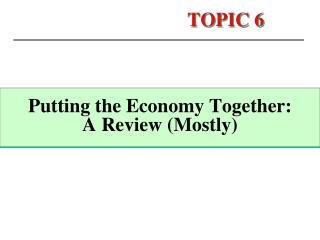 Topic 6 - . principle of islamic management operation. القوة (power) . power is the ability to influence the

Topic 6 - . transferring energy. define. energy source: an object or material that can transfer its energy to other

Topic 6. - Topic 6. the political and economic response to the financial crisis of

TOPIC 6: - . book-keeping procedures. by the end of this chapter, you should be able to:. explain what is meant by the