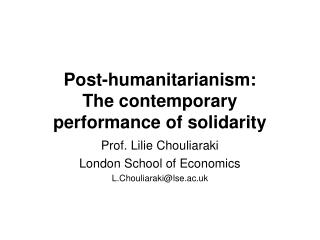 Post-humanitarianism: The contemporary performance of solidarity

Post-humanitarianism: The contemporary performance of solidarity

Cultural Solidarity - . blending of cultures creates a new identity, which can be stronger as a collective group and much

Capitalism and Post-Capitalism CERIUM, July 3, 2010 - . pierre beaudet. what we will discuss today. capitalism, an

The Contemporary Contour (Art After World War II and Contemporary Art) - . the mushroom cloud of the atomic bombing of

Post-modern and contemporary painting in Germany - . berlin wall, 1989, marking the end of the cold