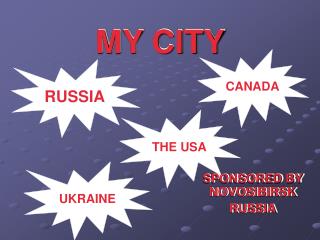 CANADA. RUSSIA. MY CITY. THE USA. SPONSORED BY NOVOSIBIRSK RUSSIA. UKRAINE. MY CITY NOVOSIBIRSK. Novosibirsk- the capital of Siberia

My city - . mataró. by estela gonzález and anna ródenas. my

My City! - . as envisioned by: lauren. bird’s eye view of my city!. click the city pic!. millsberry login: lacavana.

My city - . by nic long . history . my city is called waterworks city my city is only 1 year old i am the current mayor

My city - . mafraq is in north of jordan it’s was for a few humanity civilization, it reversal for the real , between

My city Elk - . poland. warmia and mazury. a few words about elk. elk is a city located in the masurian province. it

Trenčín – my city - . trenčín is the city where i was born. i live here and i like it because it's small but

Warsaw – My City - . prezentacja : marta pelc. map of warsaw: . something about the city: . warsaw is the capital city

AROUND MY CITY - . what can you see in the city?. what’s in your city?. is there a museum?. are there many famous

MY LIFE IN MY CITY - Lifelong learning programme  comenius