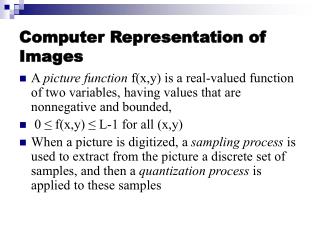 Computer Representation of Images A picture function f(x,y) is a real-valued function of two variables, having values that are nonnegative and bounded, 0 ≤ f(x,y) ≤ L-1 for all (x,y)

Numeric Representation in a Computer - . learning objectives understand how numbers are stored in a computer and how the

Introduction to Image Processing and Computer Vision - . rahul sukthankar intel research laboratory at pittsburgh and the