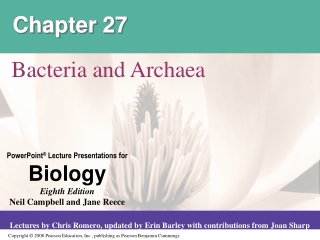 Chapter 27. Bacteria and Archaea. Overview: Masters of Adaptation. Prokaryotes thrive almost everywhere, including places too acidic, salty, cold, or hot for most other organisms. There are more prokaryotes in a handful of fertile soil than the number of people who have ever lived.