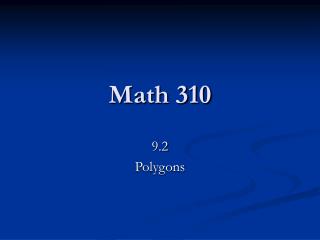 Math 310 9.2 Polygons Curve & Connected Idea The idea of a curve is something you could draw on paper without lifting your pencil. The idea of connected is that a set can’t be split into two disjoint sets. Simple Curve Def

$Tatiana Bozovic ~ How To Come Up With A Business Idea - Tatiana bozovic says thatto come up with a great business idea,

Cs 310 - Discrete Mathematics - . 1. the foundations: logic. mathematical logic is a tool for working with compound

Technology Ventures : From Idea to Opportunity - Capital is to the progress of society what gas is to car. james truslow

1.6 Classify Polygons - . 1.6 classify polygons. a polygon is convex if no line that contains a side of the polygon

Fitting Curve Models to Edges - . most contours can be well described by combining several “round” elements (e.g.,

Big Idea #6 - . “any bond or intermolecular attraction that can be formed can be broken. these two processes are in

10-8 Polygons and Tessellations - . learning goal: students will be able to determine which polygons form a tessellation.