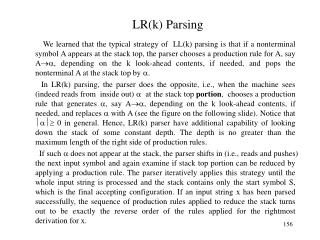 LR(k) Parsing We learned that the typical strategy of LL(k) parsing is that if a nonterminal symbol A appears at the stack top, the parser chooses a production rule for A, say A  , depending on the k look-ahead contents, if needed, and pops the nonterminal A at the stack top by .

LALR Parsing - . canonical sets of lr(1) items number of states much larger than in the slr construction lr(1) = order of

LR-Grammars - . lr(0), lr(1), and lr(k). deterministic context-free languages. dcfl a family of languages that are

Stacks - . outline. 3.2. this topic discusses the concept of a stack: description of an abstract stack list applications