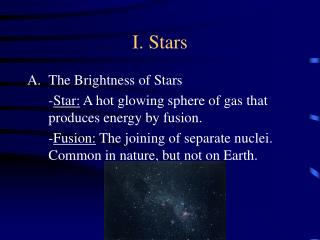 I. Stars. The Brightness of Stars - Star: A hot glowing sphere of gas that produces energy by fusion. - Fusion: The joining of separate nuclei. Common in nature, but not on Earth. Variables which affect a star’s brightness: Star size Distance from Earth Star temperature.

Stars and Galaxies - . galaxies and the universe. galaxies. we live on the planet earth, which orbits the sun. do the sun

The Family of Stars - 0. the family of stars. chapter 9. 0. the properties of stars. we already know how to determine a

STARS &amp; GALAXIES - . our local system. a star party!!! the largest gatherings in the universe!. galaxies - are

The Deaths of Stars - 0. the deaths of stars. what happens when a star uses up all its hydrogen in its core? what is the

The Milky Way Galaxy - . structure of the galaxy. the milky way is a spiral galaxy the galactic center is the thickest

Introduction to Stars - . our sun is a star and its closeness to earth has allowed astronomers to study and analyze its

Sun and other Stars - . by: kennedy howard presley wilson tyra gilbert. what is the

Nuclear Fusion : Using the energy of the stars on Earth - . the principle. collision : deuterium and tritium. how is it

Chemical Composition of Stars - . what is the purpose of fingerprints? how are fingerprints useful? where do you see

Today: - . how a star changes while on the main sequence what happens when stars run out of hydrogen fuel second stage of