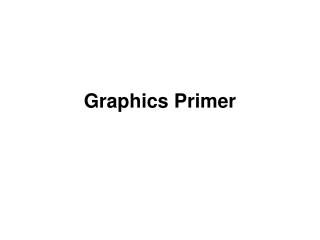 Graphics Primer. A good figure…. …can be used to convey conceptual models. …can help the reader mentally synthesize complex 3D structures viewed from different platforms and/or perspectives. …and can be used to succinctly depict “key features” that the author wishes to emphasize.

Java 2D and SVG - Some exposure to graphics or user interface programing helpful ... cast graphics to graphics2d so you