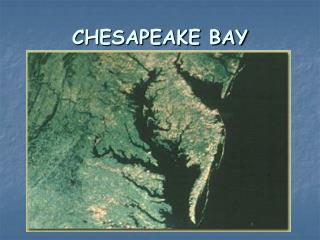 States in the Chesapeake Bay Watershed - The three major regional watersheds in virginia lead to the chesapeake bay, gulf

The Chesapeake Bay Oyster - . http://www.chesapeakebay.net/images/oysterreef.jpg. also known as the eastern oyster or

CHESAPEAKE BAY - . chesapeake as an estuary. an estuary is: a semi-enclosed body of water that has a free connection with

THE FUTURE OF THE CHESAPEAKE BAY THE INCONVENIENT TRUTHS ABOUT ITS COLLAPSE AND RECOVERY - . severn river association

Critters of the Chesapeake Bay - . plankton. the term plankton is applied to those organisms that are the “drifters”