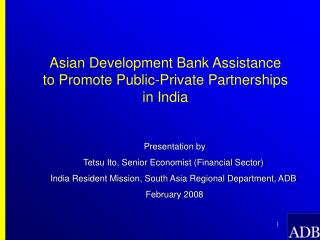 Outlook for external financing of the public sector in Southeast Europe - . dubravko mihaljek bank for international

Results Based Strategies &amp; Plans in NZ’s Public Sector - . relevance to adb &amp; yourselves? not about a

Development of Financial Institutions - . importance. they constitute an important source of long-term finance to

ICT For Development An Indian Perspective - . tapan s. parikh university of washington december 2004. what is ict for