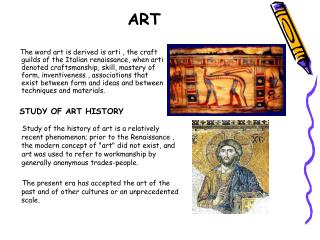 ART. The word art is derived is arti , the craft guilds of the Italian renaissance, when arti denoted craftsmanship, skill, mastery of form, inventiveness , associations that exist between form and ideas and between techniques and materials. STUDY OF ART HISTORY.