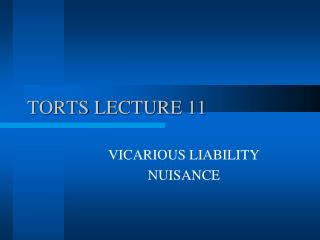 TORTS LECTURE 11. VICARIOUS LIABILITY NUISANCE. What is Vicarious Liability. Liability of D for the torts of another although D is without any blame or fault. Types of Vicarious Relations: Master Servant Situations. Partnerships. Principal and Agent Relations.