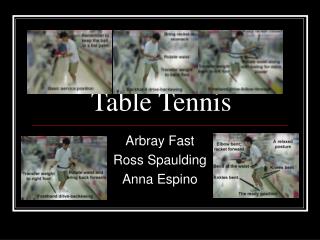 Table Tennis Arbray Fast Ross Spaulding Anna Espino History: Discipline’s Origin Table tennis was developed in the late 19 th century. It is considered to be of the English origin. It is described as a “miniature” tennis that was played indoors in the 1880s and 1890s.

TENNIS - . modern tennis. at first glance tennis seems like an easy game to play. you just have to whack a ball over a

The Tennis - . by: kim greenberg. tennis is a ball game played between two players or two pairs with a paddle and a ball

Tennis camp - . we were 5 volunteer tennis coaches the tennis camp was at aarhus 1900 tennis in denmark we made this

Tennis in Texas, Tennis in Kyle! - . national overview. “public tennis courts are the lifeblood of a park . it has been

Ping-pong(Table tennis) - . where is it from?. it is from france it’s origin is loyal tennis. how many people can play

Pool Tables for Sale - K-sports is the go-to destination when you need pool tables, table tennis tables and many

Vintage Tennis Bag - For more details on our products and services, please feel free to visit us at custom monogram