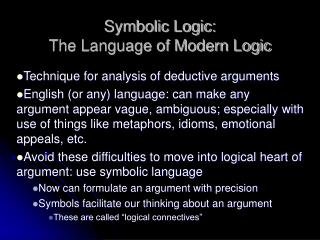 Symbolic Logic: The Language of Modern Logic. Technique for analysis of deductive arguments English (or any) language: can make any argument appear vague, ambiguous; especially with use of things like metaphors, idioms, emotional appeals, etc.

Symbolic Logic - . the following slide were written using materials from the book: discrete mathematics with applications

Symbolic Logic - ?1999 trustees of indiana university. what is logic?. logic is a process people use to infer one thing

The Logic Behind Logic Models - (c) 2002, stacy barnes. if you don't know where you're going, you will end up somewhere

Predicate Logic and the language PL - . in sl , the smallest unit is the simple declarative sentence. but many arguments

The Chain of Logic - . when a naturally induced vaccine occurs, the response is powerful, immediate and of therapeutic

Symbolic Logic Outline - . another boolean operation joining the premises together more on or what if a premise is false?

Language, Logic, and Meaning - . usem 40a spring 2006 james pustejovsky. thanks to dan wedgewood of u. edinburgh for use

Symbolic Logic - . conjunction and disjunction. compound statement. when two statements are combined by the connecting

Chapter 8 – Symbolic Logic - . professor d’ascoli. because the appraisal of arguments is made difficult by the

The Language of Propositional Logic - . the syntax and semantics of pl. languages in general. all languages have a set of