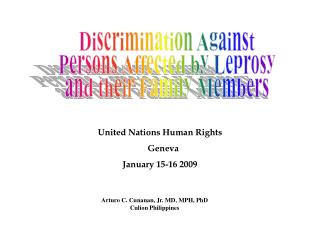 Discrimination Against Persons Affected by Leprosy and their Family Members

Discrimination Against Persons Affected by Leprosy and their Family Members Social Victimization of Leprosy Patients in the 2oth century - . by gerd ferdinand kirchhoff professor of victimology

FIELDS OF SOCIAL CASEWORK PRACTICE - . characteristics of social casework practice. by stressing the fact that casework

Stigmatisation and Barriers to Recovery - . charlie lloyd health sciences university of york. what is stigmatisation?.

What are we looking at today? - . background towards internment timeline conditions. background: events leading to

Stigma and Discrimination - . an overview of these key structural barriers to the global hiv response. growing global

Leprosy - . by: miranda leavitt and kaitlyn gibides. leprosy. -infectious disease that affects the skin (bunch 55) since

How to Create a PowerPoint Presentation - . eli student workshop by laurie miller. starting powerpoint. in the ldc double