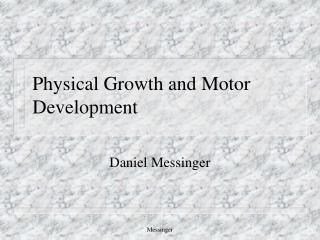 Physical Growth and Motor Development. Daniel Messinger. Questions. What is neoteny? What is the basic patterns of physical growth in infancy? How do genes and environment influence growth? What are the differences between individual and group growth curves?

Physical Growth and Development - . thank you to abby mcninch and lisa crabtree for information!. goals for today. state

Physical Growth and Development 4 to 6 - . i can describe how an average child’s height, weight, proportion, and

CHAPTER 6 GROWTH AND MOTOR DEVELOPMENT DURING INFANCY - . li-chiou chen and jane e. clark. made by wang

Growth, Maturation and the Development of Motor Skill - . measuring growth in length and stature. recumbent length is