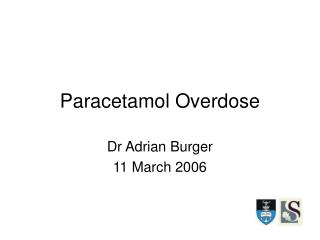 Paracetamol Overdose. Dr Adrian Burger 11 March 2006. Brought in by boyfriend, in the context of a large row several hours previously. It turns out that there have been several difficulties in this girl’s life. . Been drinking in student bar since 4pm, now 11pm. Vital signs normal.

Acetaminophen Intoxication - . acetaminophen has been approved for otc use since 1960 although the drug is remarkably

Sings of impaired liver function - . -it depend on the severity and whether it is acute or chronic. acute liver

Toxicology for the Anaesthetist - . the concepts of management of drug overdose in general specific drugs ( paracetamol ,

Management of Paracetamol Overdose - . by sharon, donna, gill, catherine. paracetamol. paracetamol was not widely used as