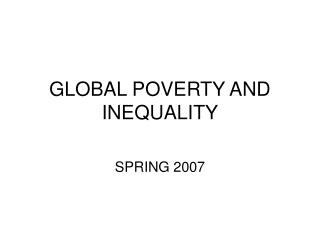 GLOBAL POVERTY AND INEQUALITY SPRING 2007 Are less people living in poverty now than they were 10-20 years ago? Is inequality between poor and rich countries decreasing? Are global poverty and inequality better seen in class rather than country specific terms?