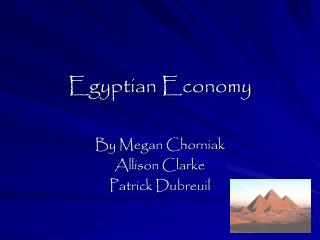 Egyptian Economy. By Megan Chorniak Allison Clarke Patrick Dubreuil. Economy. The Egyptians traded educated and farmed Trade started about 4 th century Traded from the Mediterranean Sea, Aegean Sea, and the Red sea They did not have coin money Paid in grain and Bartered for goods

EVERYTHING EGYPT - . 6castaldo 2014. fast facts family mother: nefertiti’s mother was tiy, the royal nurse for the

The Economy of Ancient Egypt - Http://www.youtube.com/watch?v=wwersfjwzzo&amp;feature= related. the economy of

Chapter 5 Sections 1 and 2 Kush and Egypt - . geography and early kush. a group of people settled in a region we now call

Standard(s) 15.Describe the culture of ancient Egypt including: class structure/governance - Beliefs, including

Ancient Egypt: Economy, Innovation, Technology - . egyptian economy was based on agriculture – wheat ranked as the

Ancient Egypt - . an early complex civilization. warm up. what are the eight basic characteristics shared by first