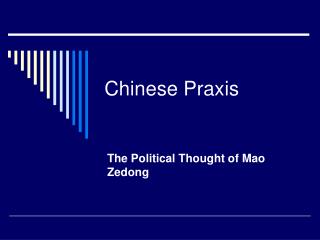 Chinese Praxis. The Political Thought of Mao Zedong. Chinese Marxism. Strangeness of socialism with Chinese Characteristics Consistent with Marxism-Leninism Mao Zedong thought spurred hope of communists despairing of Western complacency and worried those in the West hoping for peace.

PRAXIS Prep - . greg gierhart. when should i take the praxis?. look at the content of the praxis—are you ready?. ets.

Praxis III - . praxis iii – your future. as a new teacher you will be assessed in order to obtain your first teaching

Praxis II - . what, how, and why?. what is the praxis ii?. the praxis is an assessment used to measure subject-specific