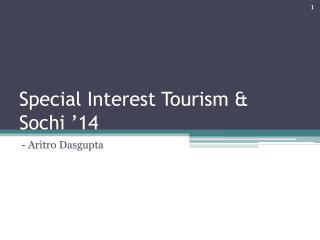 Special Interest Tourism (SIT) involves group or individual tours by people who wish to develop certain interests & visit sites/places connected with specific subject. The members in the group tend to have same / similar hobbies / interests. Set of activities which differentiate the tourists. The Very Best Tweets of #SOCHIPROBLEMS - Sochi 2014 has kicked off in a big way on the internet, with its very own tag

Careers in the Tourism and Hospitality Industry - Tourism professionals: a breakthrough in the careers and trends of the

Appendix A--Learning Objectives - 1. differentiate between simple and compound interest interest the charge for the use

GCSE Leisure and Tourism - . introduction to leisure and tourism unit 2. n.b. your macro security will have to be set to