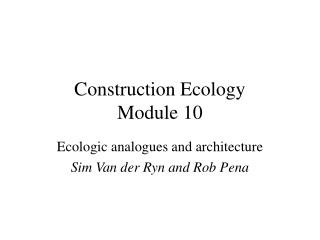 Module 10 - . submit. objectives. in this module you will learn how to: assess readiness and determine who can submit

Module 10 - . adjusting and forecasting financial statements. why forecast?. we might, for example, wish to value a

Module 10 - Price elasticity of supply and applications of the elasticity concepts. module 10. objectives:. define the

Module 10 - . unit 1 how do i write my homework on the computer?. answer the questions:. do you have a computer at home?

Module 10 - Life-sustaining treatments. module 10. education in palliative and end-of-life care for veterans is a

MODULE 10 - . the chemical bond atoms associate into specific groupings that we know as molecules. the inter-atomic