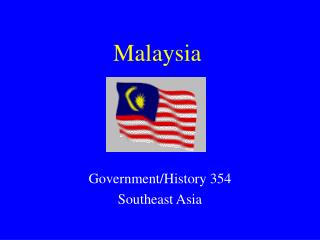 Malaysia - . malaysia is in the northern hemisphere. it is in asia. flag. the malayan flag has red and white stripes with

Malaysia - . the country is made up of two regions, peninsula malaysia and east malaysia (borneo) across the south china

Malaysia - . a country famous for tinproducts and it also has the greatest industries to products tinworks.

Malaysia: - . an introduction. geographic information. in the middle of the southeast asia. borders: land: indonesia,