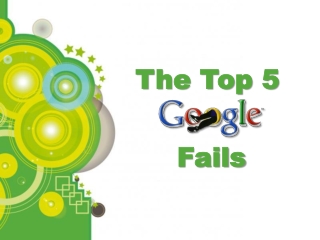 Google has seen its share of flops. Quite a number of them, actually. Here are the top 5 Google fails. Grammar Fails - . a brief look into how grammatical, spelling, and punctuation errors do, in fact, make a difference.

The top 5 issues - . no. of organisations. key activities. no. of

Hoover Fails - . objs discuss hoover’s beliefs that shaped his response to the great depression. evaluate the impact of

Top 10 Reasons Why Your Mobile App Fails - Mobile application development has become tricky. not because of the

Top 10 Google Analytics Reports - Google analytics can help you understand what content is getting traction: what gets

Top Google searches of 2016 - What the world searched for this

Top 5 - . as a group discuss and write down what you top 5 tips would be for someone about to sit a paper 2 history exam