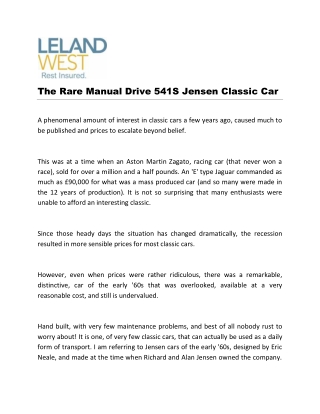 A phenomenal amount of interest in classic cars a few years ago, caused much to be published and prices to escalate beyond belief. User Manual - . user manual. a user manual is a technical communication document intended to give assistance to people

Jensen’s Alpha - . first used as a measure in the evaluation of mutual fund managers by michael jensen in 1968. idea:

Why is it a classic? - . a study by: kelci and mira. in this presentation we are going to define ‘classic’ and relate

Drive Beam Linac , surface building and equipment - . b. jeanneret, g. mcmonagle august 2010 with material thanks to