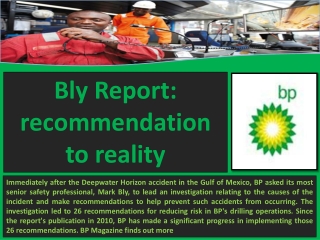 http://www.bp.com/extendedsectiongenericarticle.do?categoryId=9044263&contentId=7077294 Immediately after the Deepwater Horizon accident in the Gulf of Mexico, BP asked its most senior safety professional, Mark Bly, to lead an investigation relating to the causes of the incident and make recommendations to help prevent such accidents from occurring. The investigation led to 26 recommendations for reducing risk in BP's drilling operations. Since the report's publication in 2010, BP has made a significant progress in implementing those 26 recommendations. BP Magazine finds out more In September 2010, four months after the Deepwater Horizon accident in the Gulf of Mexico, BP released its Deepwater Horizon Accident Investigation Report, known as the Bly Report, concluding that the accident resulted from a complex, interlinked series of failures involving multiple parties. The report was the work of an investigation team led by BP’s head of safety and operations, Mark Bly, and consisted of more than 50 technical and other specialists, drawn not only from BP but also the wider energy industry. The team made 26 recommendations speciﬁc to drilling, aimed at further reducing risk. Accepting all of these recommendations, BP committed to their implementation across its worldwide drilling operations and the recommendations are now in the process of being implemented into the well designs by engineers and operations personnel. That implementation is overseen by the global wells organisation (GWO), established by BP in April 2011 to facilitate a stronger, centralised and standardised approach to all BP-operated wells activity. “Our mission is to deliver safe, compliant and reliable wells for BP,” says Richard Lynch, head of GWO. “We have to be very clear about the work we are doing and the risks involved, and have plans in place to manage those risks. “Successfully delivering the report’s recommendations will standardise the way we work, and give us the baseline from whic Apartments in Barcelona - Bizflats stylish short-term apartments,lofts and villas in barcelona - including corporate

Species Holdings - . where is everybody?. navigation. can be found as a desktop icon o r under tools in the start menu.

Congruency :aligning perception and realit y - . the following is an animated tutorial on the analysis and use of the

Barcelona targets : where do we stand? - . main findings of the european commission report muriel bissières, gender

F.B.D HOLDINGS PLC - . lydia s. mccabe. introduction. the company i have done my research on is fbd holdings plc. they