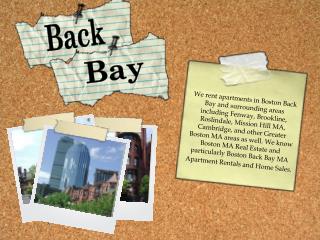 Envision living the daily life of the rich and famous. The Back Bay is an upscale suburban, retail, and commercial office district. It is considered to be Boston’s most expense neighborhoods, with townhouses frequently selling for millions of dollars. The architecture of the neighborhoods is conquered by Victorian brownstone buildings in its northern residential areas. However, in the southern part of the neighborhood it is more commercial, being the home to some of Boston’s tallest skyscrapers. The Back Bay is known for being the home of the wealthy. It is best-known for its expensive housing and shopping area. It is an arcade of upscale designer boutiques and restaurants, and dense with luxury accommodations.