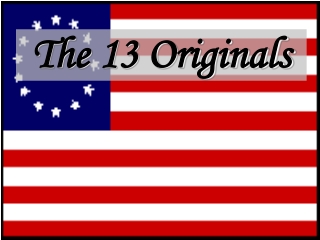 The 13 Originals. Colony # 1: Virginia. Founded in 1607 (Jamestown) Captain John Smith is given credit for starting this colony. Many people at this time wanted to leave their homeland in order to have more freedoms and to not be under the strict rule of the kings of England.

The 13 Originals - . exploring the who, when, where, and why behind the 13 original colonies of early america. what do

The 13 Originals - Instructional objectives. tlw: identify the 13 original english colonies, when they were founded, who

The 13 Originals - . exploring the who, when, where, and why behind the 13 original colonies of early america. let’s

Multiple Originals - . the problem. what happens if all originals are not found after the testator’s death?.

The Deep Blue Group Originals - Unlike the traditional orchestra, deepblue celebrates its people and their individual

Trending Originals Father's Day - Locate a special gift for your dad, uncle or grandpa this holiday in june. an excellent

Adidas Originals Metal Keyring Key Chain - Trefoil 118 is a terrific unit for t-shirts by adidas. adidas is a

Dental implants: Are they strong enough like the originals? - There is the scope of worry because dental implant may not

Swatch Originals GAET Swiss Quartz SUOB714 Unisex Watch - This uniqueness is different from being over the top. it’s