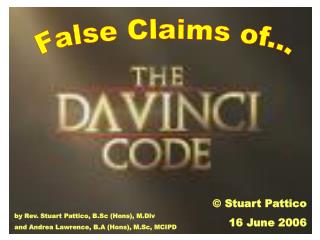 Responding To The Challenges Of The DaVinci Code Rev. Dave Geisler Meekness and Truth - Http://www.davincicode.org.sg.

Coding Techniques - . code complete + extras. layout of source code. good layout affects how easy it is to understand the

The Teacher, the Law, and the Code of Ethics - . overview of legal guidelines. agenda. levels of governance code of