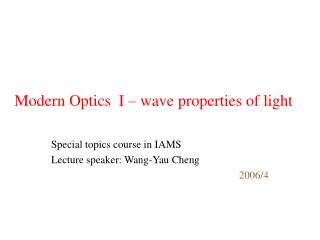 WAVES &amp; LIGHT - Unit 5 waves &amp; light what is a wave? a wave is a disturbance that transmits energy

Geometric Optics - . unit 10. optics. we have already seen that light can be thought of as an em wave. we perceive light

Physics - . light and geometric optics . what is light?. if you had an alien friend come visit you on earth, how would

Fresnel Biprism - . augustin-jean fresnel was a french physicist who contributed significantly to the establishment of

Week 3 The Sun and Stars - . part i light, telescopes, atoms and stars. the light of astronomy. electromagnetic radiation