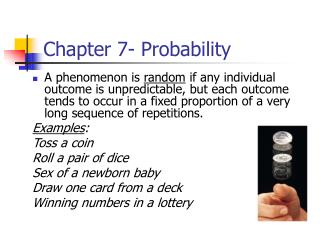 Chapter 7- Probability. A phenomenon is random if any individual outcome is unpredictable, but each outcome tends to occur in a fixed proportion of a very long sequence of repetitions. Examples : Toss a coin Roll a pair of dice Sex of a newborn baby Draw one card from a deck

Chapter 7 The Normal Probability Distribution - . 7.1 properties of the normal distribution. example illustrating the

Chapter 7: Expectation and variance - Cis 2033 based on dekking et al. a modern introduction to probability and

Chapter 7 Sets and Probability - . section 7.1 sets. what is a set? . a set is a well-defined collection of objects in

Chapter 7 Probability - . 7.1 from data to probability. in a call center, what is the probability that an agent answers

Probability Distributions - . chapter 7. the random variable x has a single value for each outcome within an experiment