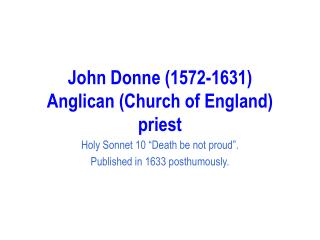 The Four Marks of the Church - . what does each of the words below mean? one holy catholic apostolic. the four marks of

MESSIAH: PRIEST OF WAR!!!!! - Study about the role of messiah in his first &amp; second coming. messiah: priest of

John Calvin - . journey to protestantism. early years. calvin studied in france in paris from 1521 to 1526. (grolier

MESSIAH: PRIEST OF WAR!!!!! - Study about the role of messiah in his first &amp; second coming. messiah: priest of

The Puritans and The Crucible - . puritan agenda:. they wanted to reform their national church by eliminating every shred

Robert Herrick - . 1591 - 1674. life. apprentice to his uncle goldsmith and jeweler member of ben jonson’s circle of

John Donne - . (1572-1631). metaphysical poets. metaphysics the study of the ultimate reality beyond our everyday world,