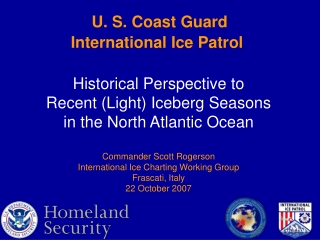 Iceberg Alley - The first icebergs of the season pass "iceberg alley" on the coast of newfoundland,

The Sinking of the RMS Titanic - . by meagan johnson. location. the titanic hit an iceberg on that fateful night on april

The Iceberg Principle - . let only the tip of the iceberg show—the right details will evoke the great mass of what lies

Six-Way 91 Icebergs 冰山 - . fog 霧 at sea is dangerous. but icebergs at sea are terrifying 可怕的 . just the

THE CULTURAL ICEBERG - . directions:. work with a partner to complete worksheet #1: features of culture think of one

The Tip of the Iceberg - . &quot;the depth of a soul is not measured by what appears on the surface.&quot;. 90%

On The Tip of the Icebergs: - An english language learner’s journey from first language to second language reading

Icebergs and freshwater fluxes in Drake Passage: modelling and monitoring