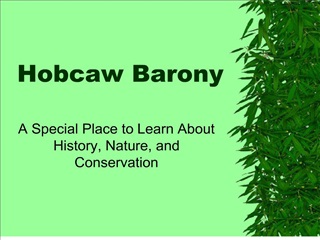 What's In A Name?. Hobcaw is a Native American name that means

G is for Georgetown - . an alphabetical journey through the people, places, and events that made georgetown what it is

Ten Provosts - . portsoy was made a burgh of barony in 1550. this meant that it was in charge of many of its own affairs.

1. Hobcaw Barony A Special Place to Learn About History, Nature, and Conservation

3. It became Hobcaw Barony In 1905, Bernard Baruch, a native of Camden, purchased part of the land and called it Hobcaw Barony, finally gaining all the land from 11 of the original plantations, a total of 17,500 acres Baruch used the land as a winter hunting retreat and a place to entertain

24. Why are the pigs a problem? Suppose there are 5000 adult feral pigs on the 17,000 acres. Females bear litters several times each year, with dozens of piglets each time. If half the adults are female, how many piglets could possibly be born in a single year? Can you say 100,000? The pigs must be trapped and eliminated because of possible diseases.

25. Now, you decide… Bernard Baruch came into the Georgetown area along with many other wealthy northerners Some even call this time the second northern invasion Think about what life was like in the area in the early 1900s with so much poverty and unemployment. Was this advent of new residents who bought the old plantations a good thing or not?

28. The legacy of Belle Baruch… Born into a life of luxury, Belle enjoyed her home for most of her life When she died she left the land to the Belle W. Baruch Foundation to benefit all colleges and universities in South Carolina as well as the people of South Carolina and visitors who come to Hobcaw Barony.

32. With deepest gratitude Lee Brockington of Hobcaw Barony shared her time and expertise with the authors on a lovely day in October. Through her generous gift of time and talent, this entire program came into being. We also appreciate the other staff members who shared their knowledge with us that day.