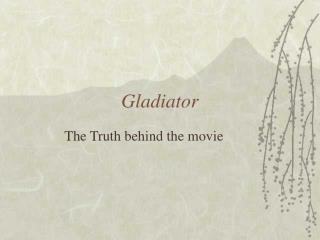 Gladiator. The Truth behind the movie. Did Maximus Really Exist?. No, but he represents the faction of Rome at this time that upheld a sense of obligation to the state and respect for duty and virtue . Marcus Aurelius. Marcus Aurelius was emperor from 161 to 180 BC A stoic philosopher

Gladiator - . the truth behind the movie. did maximus really exist?. no, but he represents the faction of rome at this

GLADIATOR - . hollywood vs. history. history. slaves were considered property just like everyone else one of the major

Gladiator fights - . lesson objectives to understand what it was like to be a gladiator to consider if the romans were

The Gladiator/TUGV - . by austin s and bryce s.

The Gladiator Identity - . roman spectacle. think of it like a roman pro wrestling. games began with etruscans. used as a

Gladiator Games Advertisement: Who is paying to put on the gladiator spectacle? - Objective: students will work

Los Angeles 2018 Jeep Gladiator - The gladiator isn't always the first pickup from the jeep brand, a long way from it. in

Improve the Light Quality with Gladiator Flashlight - Gladiator flashlight can fill this fundamental need. after all, as

8 leadership lessons from a particular Gladiator - . a mgt430 leadership course presentation based on ridley scott’s