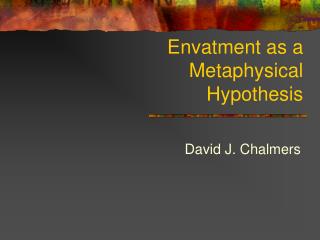 Envatment as a Metaphysical Hypothesis

Envatment as a Metaphysical Hypothesis. David J. Chalmers. Brains in Vats. A brain in a vat, connected to a computer simulation of the world, might have the same experiences that I do. The brain in a vat has beliefs corresponding to mine. I have hands There is a table in front of me.

Envatment as a Metaphysical Hypothesis

Memory, Social Networks, and Language: Probing the Meme Hypothesis II May 15-17 - The cognitive neuroscience of memory

Hypothesis - . the definitive guide on how to write a hypothesis casa grande middle school g.baker. what is a hypothesis?

Microfoundations - . consumption and investment. learning objectives. understand the difference between the long-run

The Documentary Hypothesis - . the beginnings of the historical-critical method. documentary hypothesis. until the late

t TEST OF A HYPOTHESIS RELATING TO A REGRESSION COEFFICIENT - S.d. of b 2 known discrepancy between hypothetical value