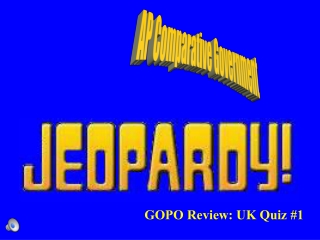 AP Comparative Government. GOPO Review: UK Quiz #1. Contestants do not forget to Always phrase your question in the form of an answer Hands on your buzzers it is time to play. Yes, Prime Minister. Common Terms. Let’s Party!. Under New Labour. Hodge Podge. $100. $100. $100. $100.

AP Comparative Government - . gopo: uk review quiz #2. contestants do not forget to always phrase your question in the

Comparative Government - . essential questions. how is the leader chosen, or how does the leader acquire power? given

AP GOVERNMENT - . mid-term review chapters 1-4 and 7-16. foundations. framers of constitution took their ideas from the