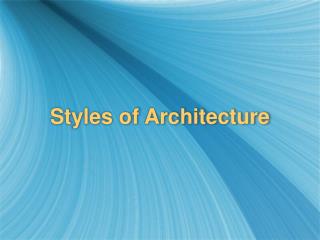 Applied Architecture &amp; Styles - . not all problems can be solved by following a simple, uniform design solution.

1.1.3 Architectural Styles Modern Architecture - . sarah hamercheck. this is not modern. modern architecture. what is

Styles of Writing - . we as human beings, we develop two forms of speaking and writing. we have: casual register = we

Styles of Leadership - What is leadership style?. leaders' styles encompass how they relate to others within and outside

Styles of Poetry - . styles of poetry stations. there are seven technical writing stations. you are required to complete