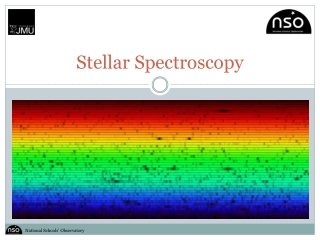 Stellar Spectroscopy. Introduction. Spectroscopy is a branch of science that is concerned with the investigation and measurement of the spectrum of light produced when matter interacts with electromagnetic radiation. 8. The Classification of Stellar Spectra Goals : - 1. gain a working familiarity with the primary spectral types and

From temporal spectra to stellar interiors (and back) - . j ørgen christensen-dalsgaard institut for fysik og astronomi,

“ Analysis and interpretation of stellar spectra and nucleosynthesis processes in evolved stars ” - . d. a.

Stellar Classification - . each star is born with a specific mass. this mass is the main factor in determining the

Stellar Spectra - . caroline fletcher. spectroscopy. the process of dispersion of an object's light into its component

Stellar Classification - . how we know. we learn about stars by looking at them through spectroscopes. all stars produce